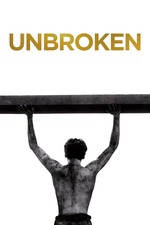 We recorded a Spoiler Warning episode about this back in our December marathon, and somehow between Best Of 2014 and controversial Academy Award films, it got lost in the shuffle. But rest assured: Unbroken is neither controversial nor the Best anything. It’s not the best movie about a person stranded on a raft, or the best biopic to include an M83 song in the trailer this year, or even the best 2014 depiction of Jack O’Connell or Domhnall Gleeson in prison (those honors would belong Starred Up and Calvary, respectively.) It’s just sort of there, with an earnest story to tell, and it’s plenty fine.

I was fortunate enough to see Louis Zamperini speak before he passed away. His story is one for the ages: it practically tells itself, and Angelina Jolie is totally content to let it do just that. In the grand tradition of old-school biopics, it hits all the requisite beats with a heavy dose of inspiration and little, if any, point of view — it just runs through the bullet points of his life, and never pretends to aim higher. Show his childhood, show his formation into adulthood, introduce his struggle, incrementally lower the lows, let the uplifting ending be brief and cap it with “What happened next?” expository text. It could have been made in any decade, by virtually any competent director, and wound up the same.

Everything is just fine. Jack O’Connell does justice to the role: he’s likable and vulnerable, if a little too perfect to have much staying power. Compared to his fantastic turn in Starred Up it’s hardly a meaty part, but it proves that he has more than enough charisma to lead a big-budget film. The remaining cast are all serviceable, and the film's nemesis (“The Bird”) defies obvious archetypes (simultaneously affectionate and brutal, as Zamperini described him,) though it’s hard to find much to latch onto. Like American Sniper, there’s a whole third act to the protagonist’s life that a better film might have explored beyond a credits sequence: his subsequent alcoholism, his turn to faith, and his attempt to reconcile with his captors all would have made for more interesting soul searching than “if I can take it I can make it." But like American Sniper, I can’t blame it too much for veering toward the sentimental when real, recently-lost lives were involved in the production. It didn’t do very much, and it certainly wasn’t “snubbed” at the Oscars. But taken for what it is — an inspirational story meant for a sympathetic audience, not a riveting bit of cinema meant to linger — it did exactly what it needed to, and did his legacy proud.