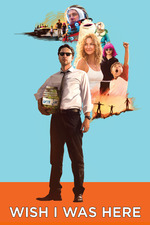 I’m an unabashed Scrubs fan, have misplaced fond memories of The Last Kiss, and — despite it being quite a bit less hip to admit now than it was in high school — I still appreciate Garden State. So when Zach Braff took to Kickstarter to make his new movie, I was happy (if a little embarrassed) to back it. His style isn’t subtle, but it’s goofy, bighearted, and often genuinely touching in places where a subtler hand wouldn’t have fit. Wedding footage with a voiceover monologue set to Peter Gabriel’s “The Book Of Love” cover sounds pretty damn trite on paper, but when it clicks, it really clicks.

Maybe Wish I Was Here would have been a better movie if it also had 8 years of backstory to make its cheesiness feel earned. As it stands it feels like a Greatest Hits collection of indie feel-good moments set to an indie feel-good soundtrack, with no driving theme or character arc to hold it together. Characters cry on (what else?) deathbeds, precocious children say precocious things, and Zach Braff is a good dad in slow motion every few minutes — but nothing is connected and it has no point of view worth sharing. It doesn’t come across as fake or dishonest; that’d be groanworthy but make sense. It’s more like he looked deep within himself and sincerely found nothing but Hallmark card poems and inspirational stock photographs. That earnestness, combined with a decent production value and clear eye for composition, makes for a very frustrating viewing experience. I didn’t hate it, but I can’t recommend it.