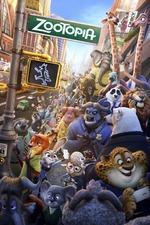 Some weeks, life seems to all make sense. Some weeks it's a blur. Some weeks you might take a trip to wine country, or book a last-minute flight to China, or pull four all-nighters virtually back-to-back, or find yourself at a dinner table personally discussing the future of AI with Elon Musk and, in the haze of sleep-dep and wine, not snap a single photo to prove it. And on the craziest of those crazy some weeks, you might even find yourself doing all of them. Hypothetically.

All that to say, it's been a whirlwind March, and while peer pressure has enabled me to keep watching and discussing movies for the podcast, personal stress has kept me from sitting down and writing a word. Sitting in a hotel in Beijing after a crazy some week, I'm thinking back to what I'd most like to revisit. 10 Cloverfield Lane was an excellent pressure-cooker flick. Triple 9 was a reasonably okay thriller. But at the end of the day, I'm stuck on Zootopia.

Let me tell you something about my experience watching Zootopia: it was not ideal. I was tired. Deadlines were looming. It was 4pm at a movie theatre in a shopping mall, and kids were everywhere. Halfway through the movie, the child behind me loudly vomited for a full five minutes, and his parents(!!) just sat there with him and his open fluids til the credits rolled. We were all going a little bit savage.

But you know what? None of that could dent this film. It's wonderful. It's wonderful as a kid's movie: the conceit (a world of socially evolved animals) is endlessly entertaining, the jokes are frequent and frequently hilarious, and the voice acting is top notch. Even scenes which I found grating in the trailer (like that endless Sloth DMV sequence) had me in stitches with proper context. It's wonderful as an inspirational story of overcoming personal adversity, recognizing that differences do exist but do not necessarily limit us. It's everything The Good Dinosaur failed miserably at being.

What blew me away, though, and what I'm sure critics have written at length about, was the message. I expected that vague girl-power brand of feminism which permeates most Young Adult flicks: the weak female squirrel will learn to (sort of) make it in the big bad world, and if we ignore that literally everyone who helps her reach that stage is a stronger man who legitimizes her ("you're better than you know"), we'll all get a cool action figure in the end.

I couldn't have been more wrong. This movie nails so much, so well, it's almost scary. It addresses sexism with surprising directness, and offers a way forward that never insults our intelligence. Judy Hopps is a flawed hero with her own set of limitations; like Leslie Knope, we love her optimism while recognizing that maybe everything she wants won't be achieved in precisely the way she wants it, and maybe that's fine and better. We witness the way misogyny influences different characters differently, and why the good-intentioned variety is sometimes the hardest of all to deal with.

Add to that the racial politics, which totally blindsided me. What they do with this society (particularly the journey of Nick Wilde) touches pain points that I've rarely seen addressed at all, let alone in a format meant of children. Tensions deepen and evolve, from casual stereotypes to mistrust to Trump-like scapegoating (aside -- why couldn't they have had literal Scape Goats? Missed opportunity, Disney...) And the stereotypes aren't crazy, baseless strawmen: they have that same nefarious twisting of truth that makes our own worst impulses so easy to sweep under the rug. In the most touching scene of the film, a flashback shows how prejudices can become self-fulfilling prophecies, which result in confirmation biases for the prejudiced, which creates a vicious cycle where both parties feel they're justified in thinking less of the other. This is not a documentary about the Muslim experience, or the cycle of poverty, or an awards-baity biopic about accepting our differences: it's all hidden in a fun, noir adventure. About talking animals.

I'm floored. It ranks with the best Pixar films in a heartbeat. And it pulls the same trick that made Inside-Out so special: it invents a new language to communicate complicated truths. That the world it builds in the process just so happens to be magical? That's the cherry on top.