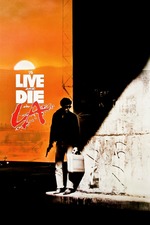 William Friedkin's take on the 80's buddy cop formula, where he makes the cops the bad guys that break all the rules, and have the bad guys, while still bad at least live by their own set of rules.

William Peterson is such a scumbag in this, with no respect and a total disregard for the wellbeing of the people around him. In another movie the death of his partner would be the motivation that makes you root for him to catch Willem Dafoe's artist-forger, but he's so awful to an informant and his partner that if you caught this on TV in the middle you'd think he was the villain.

In another movie Peterson would be the coolest guy, the film even has him do the cool action hero stuff. There's a real cat-like way he moves during foot chases. Friedkin shoots the action scenes with a real energy here, he's obviously trying to top his French Connection car chase, and it's a good car chase that has this great start-stop-start flow to it. It's all backed up by Wang Chung's great musical score, which is super 80's and really adds to the overall energy.

There's a couple of things that separate the movie from the Lethal Weapon's etc (although there is an "I'm too old for this shit" in there) There's an attention to detail to the way they do their jobs. They show the entire process of the way the fake money is being made, and we have the cops trying to get permission, and forms signed. But it still feels unmistakably like an 80's cop thriller despite its sunny, grimy atmosphere and brutal shotgun-to-face violence. It does have a pretty insane ending though, the kind that you just won't see coming. I think it's one of Friedkin's best, although I definitely liked it a lot more the first time around, possibly for its unpredictability, but probably because of that killer title sequence...

Is that Daphne from Frasier! WTF!?