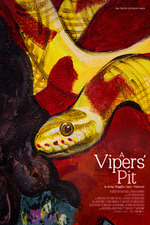 Thoroughly enjoyable time and was really excited to watch this one. Wasn't so sure about the dialogue at times and some of the character motivations seemed a bit off but I'm extremely happy that Maltese film is picking up pace and calibre.

A hilarious instance that speaks volumes about how apt the film (and book) are, happened just after the screening in the cinema lobby. A small display was set up with 80s political posters as promotion for the film. While looking at it, a younger Maltese guy walked up to it and started selectively taking photos of the PL posters. He looked to us and pointed at a Mintoff poster and told us in broken English that he was the king of Malta.

"eh mela Malti int?" ("ah so you're Maltese?") he replies, after which he runs back to his friend group asking them to all go watch "the Mintoff movie" together.