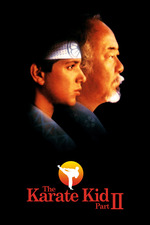 I used to love these movies, also, I probably haven't seen them in over 20 years so my views on them have drastically changed. I'm not a fan of Daniel Larusso, the character is so one dimensional, whiney and doesn't ever seem to learn the lessons that Mr. Miyagi teaches him. It's hard to feel for a kid who gets the shit beat out of him and doesn't understand why an old man teaches him unorthodox methods of karate discipline. Pay attention to what you're being taught, Daniel and maybe don't be so blind and stubborn. Sure, the first Karate Kid was THE feel good movie of 1984 but fuck me if it hasn't aged well at all. Pat Morita and the story were pretty much what made the film a success, it certainly wasn't Ralph Macchio's wooden acting. I give the first Karate Kid a 3 out of 5.

Part II is a step down from the first one, Miyagi and Daniel go to Japan to visit MIyagi's dying father and to confront a friend who believes he was betrayed by his old friend. Daniel doesn't do any martial arts at all but gets a love interest, it's not really a believable romance as Macchio isn't all together that believable of an actor. I just feel that this film shouldn't have been made at all, no need for a sequel at all as I felt Daniel got his retribution in the first one. It's just another Hollywood move to cash in on pointless crap. Avildson does his best to direct, it's got some decent cinematography, pretty much one of the highlights of the film. And now for something completely different, Nintendo made a Karate Kid Part II video game when it came out, I remember playing it as a kid. Even though I played the shit out of it, I couldn't understand why I kept playing as it was such a bad game. The game resembled the movie in all it's badness. Underneath though, I can't help but be nostalgic for this 80's flick as it was a part of my childhood.