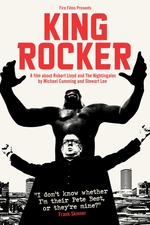 An undercurrent of the film is how Birmingham rejects its cultural heritage, almost as if it's allergic to recognition. It rejected Monro's King Kong statue, it rejected Robert Llyod, and, arguably, rejected Lee himself. He's lived in London for decades. That may be an unfair claim on my part; it is simply easier to be a stand-up in London than the Midlands and Lee clearly has no ill will to Brum. Regardless, it's rejected much more. Birmingham, if it had any nous, would be rolling in pop culture tourism and heritage museums by now, with it being an arguable origin point for both the Industrial Revolution, the Lord of the Rings (i.e. all modern fantasy fiction), and heavy metal. As is it is, my city sucks. It has given great gifts but cannot market itself. Yet, I still love it. In this way, it's like the Nightingales and Lee's relationship to them.

Nobody has heard of The Nightingales or their ancestor band, The Prefects. I hadn't before seeing this. The film mostly follows the life and career of Lloyd. He's the major throughline. He's an interesting figure; humble yet clearly somewhat affected by his lack of major success. Affected, not because of his ego but, because he thinks his songs are decent. As an older man now, it's also because he feels he owes to his bandmates and dependants to do well enough make enough money from it to provide his fair share. He says as much.

I wouldn't say Llyod is fascinating. He's a 'what you see is what you get bloke', with a very self-effacing sense of humour. He mocks the idea of leaving things behind and one wonders if that's because he really believes that or he's afraid he'll be forgotten entirely. The film is mostly Lee going through Llyod's life, nakedly and artificially paralleling to Monro's statue. Both started in Birmingham, both didn't do too well there, had a rough time outside of the city, and both are now living better just outside of the city.

A real joy is watching both clips of the band in motion and Lee interviewing various people Llyod may or may not have interacted with. Lee's so happy to be uncovering the gist of what happened (or didn't) in The Nightingales' career and presenting it to the viewer and he gets on with Llyod like a house on fire. Many times attention is drawn to the slightly artifical nature of documentary filmaking; The Nightingales' revival drummer and quasi-manager happens to be a taxidermist as a hobby, and Lee asks her if she enjoys reviving old and rotten things.

I think I enjoyed this more being from Birmingham, even if several decades younger than it's stars. Other British cities (or their residents, really) have always annoyed me; they have a clearer sense of 'who 'they' are' and 'what 'they' are for'. Birmingham is always in a neat permanent flux; constantly redeveloping itself and never feeling confident enough to settle on landmarks or an identity. Often, it sweeps away what others see as defining about it out of embarrassment. Fittingly, the film doesn't end on a well-defined point. Lee and Llyod see the Kong statue again after many, many years. They appreciate it and wonder if The Nightingales will be appreciated in time, as the Kong statue turned out to be. They don't know and neither do the audience.

What's missing perhaps is why Lee cares so much about The Nightingales. He says he listened to them growing up. Fair enough, but I struggled to see what possessed him to engage in making this documentary about them and Llyod. Llyod's interesting, don't get me wrong, but is he that interesting? Not enough time is spent with him to tell, although he's fairly guarded seeming. This is all we'll get from him. The rest of his bandmates are more open, but we see very little of them.

In the end, I wish we could have seen a bit more of everything and everyone. That's no bad thing. The film is uniquely unsatisfying like that.