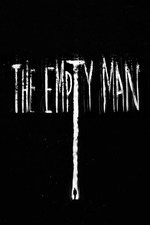 A retired detective looking into the disappearance of a local girl uncovers an urban legend known as "The Empty Man". He also finds alleged victims trace to a cult espousing the virtues of deconstructionism. The collective is in contact with the entity, whom they perceive as the chaos underlying reality, as the detective slides irrevocably inseparable from a cosmic truth most feared...

Featurette producer David Prior's film debut besieged by a difficult birth; years of production setbacks, arguments with higher-ups, a wildly inaccurate trailer, and theatrical drop in the heat of the pandemic. In a similar sense, this could be viewed as a sister film to the long troubled The Evil Within (2017). Like Andrew Getty's final testament, Prior's thriller also veers far from what every expectation assumes. Another teen-oriented townie myth quickie this proudly isn't.

Instead The Empty Man delves into theory surrounding the meaning of language; whether words have real weight or are merely gibberish ascribed significance by mankind. The cult expands this to every construct of reality and seeks truths from the ancient apparition through a vessel. To say more would spoil, but this is clearly way more than the usual from major studio horror. Surprising 20th Century Fox allowed such an approach to even reach release without huge changes (despite trying).

Aside from being narratively murky at times, the paranormal aspect is perfunctory to the terror within its philosophical core. Of course, the film likely wouldn't have found funding without a towering Grim Reaper draped in flowing trash bags with a haunt cycle similar to Ringu (1998). Not big issues, especially with James Badge Dale's involving lead and Prior's constant eye for composition. Shades of Fincher, Carpenter, Skjoldbjærg, and Merhige bolster pedigree beyond flicks content with some spectre possessing teenage airheads to illicit jumpscares from fellow teenage airheads watching. Watched via 20th Century Studios's Rental DVD.