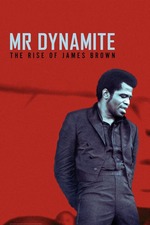 James Brown famously used to "fine" his bandmates on stage if they missed a beat, a note, a break, anything. There's incredible footage in here of Brown, mid-song, flicking his fingers at specific band members. How many times he flicked meant how big the fine was by 5 dollar increments. Guys would lose their whole nightly salary at the flick of a finger if Brown felt they were lacking. The audience thought it was just a dance move. It's funny, but there's also a real dark side to Brown that this doc doesn't shy away from. Like stuff that would end the career of any entertainer if it was done today. It's a "warts and all" doc that gives Brown a fair deal, highlighting his split persona of civil rights activist and hardened capitalist who supported Nixon. One of the highlights is Brown blowing every band off the stage at the TAMI show in the 60's and Mick Jagger laughing about it nowadays, admitting that no one could touch Brown, then or now. The doc only goes into the 70's, but that's probably for the best.