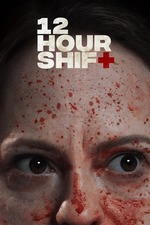 An overworked nurse specializing in black market organ sales endures an insane night shift after her cousin loses thousands of dollar’s worth of organs. One of the best parts of the movie May was Angela Bettis’ lead performance and I was pleasantly surprised to see her in her latest starring role, which proved to be one of the only highlights of the movie. The premise leads to a lot of dark situational comedy, where a domino effect just leads to things getting worse and worse, but the bloody antics are missing engaging dialogue and leaves you wishing for some higher stakes.

After a while, the repetitive hospital hallway scenes begin to lose your interest and some of the more outlandish situations happen without any real explanation. At times it feels like the script is taking shortcuts and trying to find some way of progressing the story. Additionally, as funny as the dialogue can be, its missing that extra polish to really make it memorable and engaging. The selfish and snarky characters are there, but they’re missing the proper dialogue writer. Best parts of the movie are the actor performances and unique score that blends dance beats with deep cellos and vocals. Worst parts are the lagging story, subpar dialogue, and uninteresting settings.