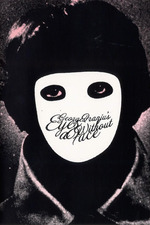 Eyes Without a Face

The film possesses a unique and haunting concept, the character of Christiane is tragic and resembles a feminine living ghost, and the makeup effects are still impressive for its time.

The worst of them are a pointless subplot where the police, who do nothing other then sit at their desks and make phone calls for the majority of the movie, decide to follow a hunch by blackmailing a shoplifter into dyeing her hair blonde, getting admitted to a psych hospital, then waiting to see if she gets kidnapped! Then when she does get kidnapped, they don't notice, give up on their lead, and leave the movie.

All the while, the theme music appears whenever the secretary is stalking young women then awkwardly cuts out when the scene transitions. The music consists of an upbeat harpsichord sounding carnival tune that some may argue is ironic for the horror elements, but instead just sounds out of place and embarrassing.

Criterion has this habit of preserving movies that possess a groundbreaking idea, but the rest of the movie doesn't execute it to the best of its ability. This is one more of those films. Why is it that whenever this movie is discussed or praised, it's illustrated with pictures and footage of the ghostly Christiane with her soulless mask or her walking with doves? It's because she's the best part of the movie.