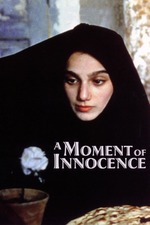 You Have 90 Minutes To Comply 2: Brevity Rules

Over the last couple of years I've become absolutely besotted with Iranian cinema, mostly through the films of Asghar Farhadi, it has to be said.

A Moment of Innocence is a step away from the familial dramas that I had mostly become accustomed to in the Iranian films I've watched, and is instead a rather mindbending sort of docu-comedy drama. I can only just get my tiny brain around the concept of a film based on real events that portrays them as a mix of reality and fiction.

I don't mind though, because this was just so enjoyable. There's a lovely sense of humour evident here, right up to a captivating last 10 minutes or so, starting with the amusingly rendered opening titles which themselves play around with 'fiction'. Mohsen Makhmalbaf's real daughter then provides some laughs as an overly-quizzical schoolgirl, as does a film-obsessed costumier.

From that point on it's quite light-hearted but with a really serious base. Musing on trying to recapture and rewrite lost years as well as appropriating an event that proved devastating for one party and trying to spin it into a positive experience, Makhmalbaf does spin a dizzying web while telling his tale. Yet he also provides a thoughtful treatise on his 'characters' that is refreshingly frank, all the while casting a sharp eye on the treatment of women in Iranian society.

Formally extraordinary and quite wonderful, really.

A Colt Is My Passport