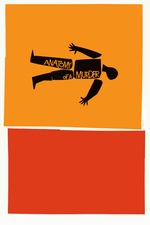 I have been wondering ever since I rewatched Anatomy Of A Murder recently just why it tends not to get mentioned quite as much as some when discussions are had about the great courtroom and legal dramas.

That's not to say that it isn't widely lauded and very highly regarded in almost all circles. But when you ask most people what the best drama of this type is they will generally go for 12 Angry Men or maybe The Verdict or possibly even To Kill A Mockingbird. Which is fine by me as they are all wonderful films in their own right.

But I want to make the case for Anatomy Of A Murder. Heh, make the case. Yes. Clocking in at over 2 and a half hours, it is certainly a meaty piece of work, poring over the details of a case where a man pleads temporary insanity after murdering a man he claims had raped his wife in extraordinary detail. Perhaps more significantly for a film still made under the restrictions of the Hays Code, it pores over those details in graphic and quite racy detail, for its time.

The performances are utterly exceptional. Lee Remick as the flighty wife of the accused flirts with everything that moves and has you wondering how her career never hit the heights that it clearly should have done after this. George C Scott pops in about halfway through and almost steals the film as a superstar guest prosecutor brought in from the 'big city'. But James Stewart, almost always a wonderful hand, of course, is asked to traverse rather more adult territory than he is used to here and handles it just as you would expect him to in surely one of his best ever performances.

The courtroom scenes are thrilling displays of brilliant acting and showboating from Stewart and Scott respectively, but the investigative scenes outside of the courtroom are pieced together so effortlessly that, despite their detail, at no point do you feel at all lost or confused.

It's quite simply a masterclass from beginning to end. I still haven't been able to quite figure out why it gets slightly left behind in those discussions, though. Maybe it is the length of the film that works against it - but I can't recall watching a film of this length before that seems to zip by so quickly. Simply brilliant.

I rest my case, your honour.

Me and You and Everyone We Know