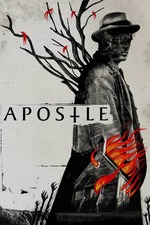 In the Month of Madness - The Others

I've been sceptical about Gareth Evans, even back when I was rather enjoying, but not loving, The Raid. It was a really good action film that could have been great.

I think it mostly came from The Raid 2, and I'll be honest, that film is mostly the reason why I'm not buying it with him. Such a ludicrously bloated mess and a film that completely forgets why its prequel works for the most part, my feeling was that he had very quickly got ideas above his station before he had even really figured out what his strengths are as a director.

In fact, his Safe Haven segment in V/H/S/2 is the most I've enjoyed him so far, so hearing that he was tackling horror again piqued my interest. And then that was immediately tempered on hearing that this was a Netflix original as their record this year especially has been, well, somewhat mixed if we're being very kind.

Apostle doesn't have the feel that so many Netflix originals have had so far. Netflix is struggling to overcome a feeling that it's the 'new DTV' with so many unadventurous and nondescript releases dominating its schedule this year, peppered with a couple of complete disasters and the occasional enjoyable thing or two. Instead, it has the feel of a film that could have been a better experience on a big screen, but that no studio was going to put a 130 minute ultra-violent period horror The Wicker Man-alike in the multiplexes.

I can't say they would have been wrong in feeling that way. While the box office success of The Witch could be perceived as suggesting that there is an audience for period / folk horror, as much as I loved Robert Eggers' film, I think if people REALLY knew what they were getting with that then they probably wouldn't have gone to see it. All us film nerds on Letterboxd loved it, but I've also heard plenty of less fanatical filmwatchers say they found it as boring as hell.

Apostle would probably have sunk at the box office once people twigged that this looks a bit like The Witch. And if they didn't then they would have found it far more boring. Evans wouldn't have learned from the pacing of The Raid 2 because clearly that was so well received by almost everyone, but as a result he carries the problems of that film into this one.

The story is a decent one, if not hugely original, but not one that necessarily relies on a slow building of tension and atmosphere. We more or less know what will happen here, it's more about touching the bases in an enjoyable way and anything else he can throw in in the meantime. Yet Evans drags this through a tortuous first 90 minutes - which makes no sense considering how quick it is in throwing Dan Stevens on a boat to go and rescue his kidnapped sister from a religious sect.

I don't understand what he achieves here. It's not like he uses that time to try and explain the supernatural elements to this story either, to the point where they look extremely stupid and out-of-sync with the rest of this story. It's just long for the sake of it. Stevens really struggles early on and is clearly an actor who works better with more intense situations - although he's not helped by some questionable dialogue.

But he does improve markedly as it progresses, and it's no coincidence that he's at his best as the blood starts to pour in the last half an hour. Strong performances by Lucy Boynton, a show-stealing Mark Lewis Jones and the always reliable Michael Sheen just about keep it afloat early on but once it enters its final quarter it becomes a lot more interesting and frustrating.

It's perhaps a fairly simple opening of the gore floodgates but Evans *does* have a knack for shaking violence and fight scenes. He is a VERY strong director on this front and I so, so wish that he had concentrated on that more in his last two films. Because much like with The Raid 2, Apostle does have some notable things going for (it looks and sounds great too) but his pacing is terrible and his perception of how this story should be told is all wrong. Another wasted opportunity but at least a change-up from the usual tepid fare served up by Netflix.