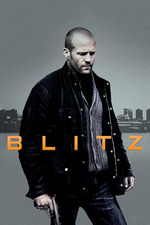 Academy Award winner Mark Rylance, there, being accosted by a man who has Michael Jackson's shit in a jar as a souvenir.

What an odd film Blitz is. At various points during it I thought I might hate it but having thought about it at the end, I realised I'd rather enjoyed its lurid nonsense and its surprising insistence on remaining a gritty crime thriller right to the end.

I was under the assumption, as I think anyone would be, that this being a Jason Statham film it was going to just degenerate into lots of daft action scenes after a while. Yet save for one excellent foot chase scene, it never actually does that and sticks to its guns right to its morally dubious but nevertheless narratively satisfying finale. Although with an opening scene that sees Statham battering three car thieves with a hurley, you could see why anyone would expect something sillier from this.

It's an ending that was born more out of a 1970s crime film than anything, and that's always going to sit well with me. Its refusal to kowtow to 21st century sensibilities is certainly the main strength of Blitz, but it's also its weakness at times. Its strangely high level of homophobia, mostly targeted at Paddy Considine's gay detective, was quite uncomfortable.

There's also the feeling that the dialogue has been written with American audiences in mind. It rarely feels completely authentic and it does rather distract from its otherwise fairly admirable commitment to its sleazy serial killer plot. It could certainly be more committed, but I felt that was more to do with the limitations of the director and possibly the script too.

Certainly the cast don't hold it back. Statham's fine in the lead role although not at his most comfortable here, perhaps, while David Morrissey's bottom feeding journalist is rarely glimpsed outside of one key scene. Rylance briefly adds some class, even Luke Evans is bearable, and Zawe Ashton is excellent as a drug-addled cop who is one of Aidan Gillen's prospective villains.

Gillen is quite brilliant here. It's certainly the sort of performance that suggests that he had an absolute blast in this role and also one that is probably way better than a film like this deserves. Strutting around London picking off coppers in his fluorescent green sunglasses, stopping occasionally to kerb stomp somebody's head in, and generally acting like a completely unpredictable nutjob, he's absolutely electric right up to the Dirty Harry-esque final scene.

I think there's just about enough in the rest of Blitz to steer clear of any suggestions that it's completely reliant on how good he is here, but it's also beyond doubt that he's easily the best thing here too. Even so, Blitz is largely enjoyable without ever being particularly likeable, if you know what I mean.