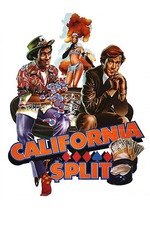 I’ve come to the realisation that I could watch every movie with poker in it ever made and I still won’t have the faintest idea what’s going on.

Fortunately, California Split isn’t about poker that much anyway. There are two scenes about poker but only one of them features enough details of a game that actually understanding what’s going on. The other one doesn’t even give you any details about any of the cards that are being dealt. Robert Altman, whose filmography I am continuing to slowly work my way through (and enjoying almost every bit of it), is more interested in using those games and the other scenes of gambling here to analyse the motivations of gamblers.

Alongside The Gambler, I feel like California Split is one of only two films I’ve ever seen that actually does a really good job of capturing why many people gamble. But where I think Altman’s film has the jump on Karel Reisz’s otherwise marvellous film is that it doesn’t show as much interest in addiction or obsession but rather, as I mention in the last paragraph, motivations. There’s an actually very good slogan being used by betting companies here in the UK that reads “When The Fun Stops, Stop”. Now whether it has any effect on people mounting up huge gambling debts or generally having problems with an addiction to it betting and gambling, I have no idea. But as someone who does love to bet and really get into a good, meaty session of betting, it rings true.

There have been times where I’ve been on a great winning streak, as George Segal finally experiences at the end of California Split (although my winnings are in the hundreds as opposed to tens of thousands), and then just feel burned out. Like I’ve put so much mental energy into keeping a run going and the excitement and elation of winning just reaches a certain point and then my brain just shuts down. To many, Segal’s decision may seem ridiculous, but even Elliott Gould, who wants to see him keep his streak going, gets it. “Don’t mean a fucking thing, does it?” he asks Segal when he hands him his half of his winnings.

Here is a film that recognises that for many people, it’s not actually about the money. It’s about wanting to win. It’s about the excitement of the uncertainty of the outcome. I have never come close to betting more than I can afford and I have never relied on winnings to get me by - the money isn’t why I do it. I understood these characters but, even if I were to put myself in a more neutral place, I think Altman does a fantastic job of making those motivations clear and easy to understand.

Yet he also keeps the two main characters completely separate in their approaches. Gould sees it all as a good laugh. If he has a few losers, he breezes it off because he just loves to be involved in the action. In the later scenes, he might be seeming to get irritated at Segal giving him the brush-off or possibly even jealous that he’s not doing any of the winning, but that’s not so. He’s just bored because he wants to be doing something as well. For Segal, he initially IS doing it for the money but once he crosses the line of having covered his debts, his attitude transforms into something more akin to Gould’s.

The usual Altman traits of overlapping dialogue and scenes (the opening credits are stunning for this especially) are all present and correct, and the performances from Gould and Segal are note perfect. It probably helped Gould that he was a noted gambler in real life from what I’ve heard. I do think California Split is lacking in some of the narrative depth that marks Altman’s best work but this was a thrilling and dizzying ride that understood its subject matter as well as anything I’ve ever seen.

Might just have a couple of blackjack hands over tea….