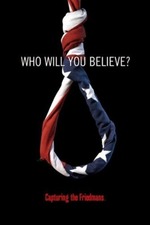 I don't watch a lot of documentaries and I recently wondered if that was because I find them very difficult to write about.

Writing reviews on Letterboxd has become almost 50% of my reasoning for my filmwatching these days - I enjoy writing about them just as much as I enjoy watching them, on balance. But with documentaries, I do find my own personal stance towards why I watch films as a whole somewhat interjects with the purpose of many documentaries.

It just doesn't seem quite fitting or right to me to sit here and say that I really enjoyed Capturing The Friedmans because, you know, of the subject matter involved. Additionally so because you read around and, obviously, there are (completely justifiable) critiques of the film about stuff that was left out and stuff that may have been used in a manipulated manner.

You also read stuff about the intention of the filmmaker(s) in making the film, their neutrality, whether neutrality actually matters in some cases and so on and so forth. The whole topic of documentary is one I find equally fascinating and frustrating. I just simply don't believe you can ever have such a thing as a completely neutral documentary, and I often find complaints about such films not being straight down the middle to be missing that point.

But at the same time, I can't help my own feelings towards a film, let alone Capturing The Friedmans. It was a completely engrossing movie that I actually found most interesting when probing the family dynamic at play here and also in the way that I found myself doubting the word of almost everyone in this entire movie. I don't have an opinion on the case and I don't have any intention of reading up on it further, but the presentation of it here by Andrew Jarecki was remarkably tense and uncomfortable.

The tagline says "Who Will You Believe?" and I certainly didn't expect to come out of this thinking, "Practically fucking no-one."

Argh, I can't write about these bloody things, what's the next Resident Evil film....