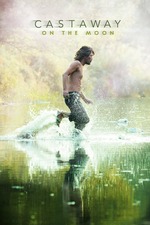 Okay, just got something in my eye. Honest!

Castaway On The Moon has become something of a Letterboxd favourite in the short time this grand site has been in existence. A lot of the time, if not always, I think films that have been embraced from a less lofty position than your average blockbuster on this Letterboxd have been really rather impressive indeed. I'm giving permission for this one to top the pile.

I'm not saying I'm getting the casting vote or anything, I'm not the boss of Letterboxd, after all. I'm just saying that if a tie-breaker was needed, I'm siding with Castaway On The Moon because it really is quite wonderful. What I took away from this film is the fact that for a film like this to really work, you don't have to have everything make sense or be explained to you.

In all reality, I think a bloke setting up camp on a small island the middle of a river that runs through one of the biggest cities in the world would probably be moved on a lot faster than the months on end it takes for anyone other than the agoraphobic girl in an apartment a few hundreds yards away to notice that he's there. Some films earn their stretches of the imagination just by virtue of being utterly charming and lovely - both of which sum up this film perfectly.

I will admit to finding South Korean cinema a struggle at times, mainly because it seems prone to repeating itself. Numerous K-Horror films are STILL recycling Ringu and crime thrillers are still excessive to the point of tedium in their blood-letting and violence. But there seems to be an under-current of lovelier and more thoughtful films that I think might be the key to my further enjoyment of the cinematic output of a country that I HAVE enjoyed many films from in the past.

For instance, I could see Castaway On The Moon sitting perfectly in a double bill with the beautiful 3-Iron. Both of them are films about two people brought together in very unusual fashion, when they probably weren't even looking for someone. They are also both films where we are left to guess about how these people got to this point.

I think on this front, Castaway On The Moon is a superior film to almost everything that I have seen before. Especially when it comes to its main female character, the shut-in Jung Ryeo-won. We can see hints why she has not seemingly left her apartment for years and has taken to hoarding - her only contact with the outside world appears to be internet chatrooms.

We are given the clues and we can get a pretty strong idea of why she is like this. By not feeding us too much, it makes a scene where she makes contact with a female visitor to her place, who we presume is her mother, all the more stunning. It's a really, really great scene. I nearly lost it. Then I beat my chest in a manly fashion and everything was alright with the world.

The same thing applies when Jung Jae-young finally accomplishes his main goal in his new home - more chest beating resulted. If I'm honest, there was far too much about Castaway On The Moon that I enjoyed or loved and I think any film that has such large jumps of logic and can get away with them without any question at all is clearly something wonderful.

Not a fan of black bean sauce, though, I have to say.