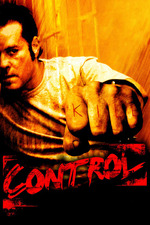 I wish I could remember how I even happened across this to put it on my watchlist in the first place, because practically nobody else appears to have seen it.

In fact, I'd never even heard of it until about a week ago and I think I only scheduled it for a watch on the basis of its cast. As it turns out, even if the surrounding film hadn't been any good I would have enjoyed it for its cast, which is the minimum requirement for me with any film like this.

Ray Liotta, who at his best is an electricifying presence but all too frequently simply cannot be arsed, turns in one of his better performances in the lead for a start. You can rely on Willem Dafoe and Stephen Rae a lot more, plus Michelle Rodriguez and Polly Walker back them up well too.

So it's all well and good on that front. But in most other ways, Control, directed by Tim Hunter, who's probably best known for River's Edge (which I rather hated), is an excellent film too. It starts off looking like it's going to be a pretty standard nutter-on-the-loose action thriller after Liotta, playing a murderer who was supposed to be given a lethal injection, is instead spared and handed a chance to try out a new temper-curbing experimental drug.

It sticks with that narrative for a while, which works well for where it chooses to go, with Liotta actually proving to be reformed as a result of his treatment. Hunter plays it well because for a while I just didn't buy it and was waiting for the moment Liotta went off on one. Instead, he uses his freedom to try and apologise for his actions, although that in itself lands him in more trouble.

The whole 'you can't run away from your past' narrative is as old as the hills but here it has a weird poignancy as it is attached to a violent murderer. It doesn't quite land the ending - one of those cases where you can see what the director was going for but just misjudged the mood and characters slightly. Even so, this was far more intelligent and interesting, not to mention visually impressive, than I ever would have expected of this in a million years. Rather an unseen gem.