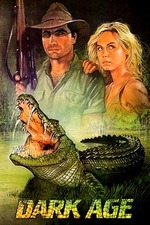 Dark Age is a little seen Ozploitation film that is apparently a favourite of Quentin Tarantino's and features another Tarantino favourite, John Jarratt (in his pre-Wolf Creek days), chasing after a giant crocodile that is gobbling its way across Australia.

This isn't any ordinary giant crocodile, though. No. This is a very special crocodile that is worshipped by the Aboriginal people and regarded as sacred by them. They're not going to help with the capture and killing of it, so just how is Jarratt going to track down the monster now that it appears to be heading for Sydney and a right old buffet?

Australian crocodile films have undergone something of a surge in popularity in the last few years thanks to Black Water and Rogue, both of which are equally good fun and the latter of which also features an appearance by Jarratt. This one is a good laugh as well. It's fairly untaxing, as you would expect, with a couple of impressively nasty moments and some nice bits of humour as I always like in monster movies such as this.

Alf Stewart from Home & Away, with added questionable moustache, pops up halfway through as Jarratt's boss and immediately gets all the best lines ("You can't install a bloody dunny in this valley with some black moaning about it!") and the ending is a nice twist on what you would expect this kind of film to end on. It's actually a really good ending even if it is one with a rather troweled on message about preserving nature.

Almost 5 million Australian dollars were spent on making this film, which was a fair chunk in the 1980s for an Aussie film, but bizarrely it was never given a cinema release, still has no official DVD release, and has largely existed through occasional TV showings and the upload on YouTube that I watched. Apparently Tarantino has occasionally hosted special screenings of it as well.

Director Arch Nicholson, who died two years after the release of Dark Age as a result of motor neurone disease, is regarded as one of the main filmmakers in the Ozploitation genre and he directs this with more than enough visual flair and ability to suggest that we were robbed of a lot more enjoyable films from him. This is nothing more than a daft horror-adventure romp, but sometimes that's all you're asking for.