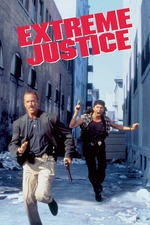 You're usually sure of a good time with Mark L. Lester (or at least I am) and I just wonder how that can still be the case with a film that never really seems to know what it is.

Extreme Justice starts out, and continues for a while, as a pretty grim and grimy action thriller. The sort of thing where pregnant robbers are shot in the stomach and a bloke robbing an off-licence is shot about 180 times. It's completely over-the-top, complemented by a shouty performance from Lou Diamond Phillips, and a grrrrrrrr macho cast du jour.

You also get an amazing scene where Scott Glenn goes home and starts talking to his absent ex-wife about how his day has been, before pointing a gun at a picture he has of her and telling her how much he misses her. Yeah, I mean, it's a Mark L. Lester film, come on.

Then somewhere along the line it decides it wants to be a more serious crime film, with Phillips suddenly given a half-arsed Serpico sideline, egged on by journalist girlfriend Chelsea Field. It actually, weirdly, shows some semblance of competence with this storyline and it stops being quite so hysterical.

It shouldn't work but that's the story of Lester's career. Almost none of his films should work but they often do. Extreme Justice isn't his best, and is sure to be hated by half the 18 other people who have probably watched it on Letterboxd, but I rather enjoyed it. Don't ask me why though.