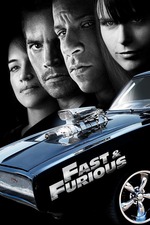 There are a couple of things that annoy and concern me about this series at this point.

Firstly, the titles. Couldn't they just pick a title and put a number on the end of it and stick to it? Constantly farting around with the wording in it is neither cute nor cool, it's extremely annoying to arseholes like me who like to see things a bit neater and tidier when it comes to this kind of thing. Also, if they were going to call it this, they really missed a trick not called it Fast & Fourious. Or Fast & 4ious. Imagine how annoyed people would have been, it would have been ace.

Secondly, there's Justin Lin. Now, he directed Tokyo Drift, which was shite. And I think he directs the rest of them after this. Although this one is a considerable improvement as a film and by him, I think there's enough evidence for me to be worried about upcoming instalments that he actually doesn't get what I want from this series and how I think it will work best.

If he's about to take it down a more serious and gritty action film route, then that worries me. For me personally, I enjoyed the sense of humour and sense of fun that 2 Fast 2 Furious had. A lot of that is lost here as Lin has a go at doing a plot and making it a bit more hard arsed, which is a real shame I think if that's the way things go.

That's not to say that I didn't quite enjoy it. There are still some really fun scenes here with Paul Walker battling with an insistent satnav being exactly the sort of daft shit that I would have liked to have seen more of here. I also liked the fact that there seems to be the pulling together of something of a universe here too. Bringing back Sung Kang is a good move even though he was supposed to be dead. But realising he was the only good thing in Tokyo Drift, they've obviously decided it's worth pissing around with the timeline for. Well, why not? It's not meant to be Haneke, is it.

The ending's a pretty good one too as it leaves you guessing and the development of the relationship between Vin Diesel and Walker, who is visibly growing in confidence as this series progresses, is enjoyable to watch as well. The support cast provides absolutely zero of note aside from Gal Gadot smouldering away effectively and Laz Alonso on effective bad guy duties. But it's not bad, I guess.