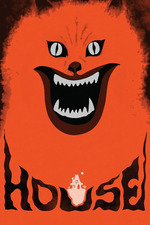 OK. Which of you fuckers spiked my corn flakes?

Well, clearly reviewing this 'properly' is a task that I envy no-one for. I for one am not even going to attempt it. Instead, I'm going to list a few ways in which this film is weird:-

3) The music that sounds like a radio being tuned.

4) The fact one of them is called Fantasy.

5) The fact one of them is called Kung Fu.

6) The disembodied head biting one of them on the arse.

7) The other disembodied heads.

24) The fact that one of them plays guitar during break-time at school.

25) The bit where the guy falls on the bucket and it starts moving around of its own free will.

26) The split-screen of the scarf floating out of the window.

27) That one of them is called Gorgeous.

That's enough to be going on with. For now.