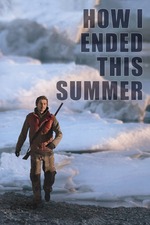 Continuing my one day world cinema festival with this Russian drama about a pair of meteorologists who are stationed on a remote and deserted Arctic island.

When the youngest of the two, a naive college graduate on his first such posting, receives a message that he refuses to relay to his colleague (who is away trout fishing) the atmosphere between the two becomes aggressive and unbearable as he continues to find ways to avoid telling his colleague the truth.

Shot on a genuinely deserted meteorological station and island, How I Ended This Summer is for the most part told from the point of view of the younger of the two, Grigoriy Dobrygin, and ultimately this proves to be completely the right decision as his decision making impacts the two of them increasingly as the film unfolds in occasionally incredibly tense fashion.

It becomes apparent quite quickly, thanks to some wonderfully subtle acting from Dobrygin and some equally subtle direction from the excellent Aleksey Popogrebskiy, that his character really is, to be blunt, a bit of a thick twat - which does in turn make you question just how on earth he got this job in the first place. Suspension of disbelief is needed in that regard but nowhere else.

The slow pace is entirely appropriate given the nature of the story, characters and location - and without it this would improbably hurtle towards what is otherwise a very deft game of cat and mouse in the last half an hour. It never ever meanders either with every scene furthering the development of the two characters, their individual state of mind, and their relationship. But it manages to maintain a sense of unpredictability, too, climaxing quite poignantly and extremely satisfactorily. This latter point was perhaps the most impressive of all - I am almost never satisfied by the ending of a film

This is a mightily impressive film. Russian cinema is not one of my strong suits, I will admit that, and I won't deny that How I Ended This Summer was exactly the kind of film that I have presumed that the country produces a lot of. Its quality, however, was rather more of a pleasant surprise and this really is a terrific and beautifully filmed examination of just how stupid a human being can be, more than anything.

You may also never eat trout again - should you already do so.