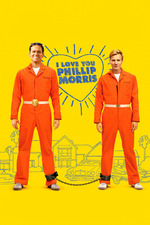 I just wanted the bloke in prison who kept saying that his word was his motherfucking bond to be in this more or to get his own film or something.

I guess I can see why so many people have taken to this one in a major way but it just didn't really catch on with me. Aside from a couple of out loud laughs at the cock cloud and Leslie Mann (appallingly underused here) asking if stealing and being gay went hand in hand, it wasn't really funny enough to work as an out-an-out comedy. Although I know it wasn't trying to be as such.

As a romance it didn't really work for me either. Jim Carrey and Ewan McGregor, who is fantastic here, have really good chemistry but the problem is Carrey. Quite why he plays this one in something approaching his usual level of mugging is beyond me. Why didn't the directors say, "Remember what you were like in Eternal Sunshine Of The Spotlight Mind? More that and less Liar Liar please."

It just unbalanced the relationship for me, even more so because he doesn't give an even performance throughout, he see-saws between serious and Carrey-daft. Additionally, all the schemes he comes up with are not nearly as interesting as the directors seem to think they are. The twist at the end is well played, but it mostly just came off as a poor relation to Catch Me If You Can.

I only watched this because it's expiring soon on Mubi but maybe I need to apply the same logic to Mubi that I do to things in my food cupboard and just let things expire sometimes.