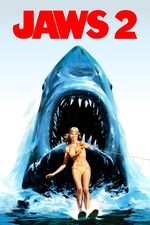 More than perhaps any other proper movie sequel in history that follows on from a truly classic original, I'm left asking of the sequel to the truly classic Steven Spielberg original what might have happened if it had been made first.

It might sound like a strange thing to question, especially as a lot of the narrative would have to be changed to allow things to make sense here. But I do believe that if Jaws 2 had never had to live in the shadow of arguably THE great monster horror movie and summer blockbuster of all time that it might have had a shot at being regarded as a very enjoyable film in its own right rather than a slightly poor relation to a legendary original.

Almost everything pales in comparison to Spielberg's original, of course, but judged on its own merits, this IS a very enjoyable film. Roy Scheider reprises his role as the Amity Island Chief of Police, and Lorraine Gary and Murray Hamilton also return, as the island once again seems to be threatened by a killer shark. This time, however, Brody's on his own in dealing with the menace.

Much has been said about how ridiculous the ending it is, but it's not that much more of a flight of fantasy than the original's was. It also has an excellent subplot regarding a killer whale which does contribute significantly to how the story pans out. Scheider is perhaps even better here than in the original, basically carrying the film on his own this time, whilst Hamilton's continued incredulity at events doesn't feel played out at all.

A cloud in the shape of another killer shark may loom large over it, but Jaws 2 is a really enjoyable and deserving film in its own right.