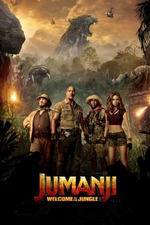 One of my favourite things to do here on Letterboxd is, when I watch a sequel or reboot or remake to or of something, is to go through my friends' reviews and see if anyone has done a "Ugh why have they done this I'm so not watching this!" kind of review without even seeing it and unfriend them immediately.

So goodbye to those two people.

Anyway, pathetic e-pettiness aside, Jumanji: Welcome to the Jungle was an actual good film and so much more fun than I expected even as someone who cannot be not entertained by The Rock. Reteaming him with Kevin Hart after the almost equally enjoyable Central Intelligence was clearly a smart thing to do, but casting Jack Black as a teenage girl and Karen Gillan full stop was perhaps even smarter.

Notable highlights, aside from the bit where half the audience in our screening did a knowing laugh at The Rock raising the People's Eyebrow and the other half not knowing what the fuck we were all laughing at, were:-

* Everything that Karen Gillan did and said.