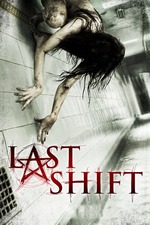 Last Shift is exactly the kind of horror film I personally want to see more of.

As the genre becomes mired in mumblegore shite, Last Shift not only shows how you can do an homage without obnoxiously over-egging the pudding but that you can take your time as long as you're prepared to make the effort to create some atmosphere in your first half.

And really, the first half of Last Shift is all that. It's all atmosphere. There are a few bumps and clanks and slams going on, but I was never really sure what was going on. What I did know was that I was enjoying the build-up to whatever director Anthony DiBlasi had lined up for later on. Which, in a way, worried me. I've seen way too many horror films lately which start like this but really have no clue how to adequately round the story off.

DiBlasi, however, really does manage to get a beautiful pace to his film going. There's a real natural flow to it that suggests that we're not going to get some massive and horrific grandstand finish, but rather an effective and interesting twist. And that is exactly what we get, with it all boiling down to an impressively downbeat ending that was even better than the ambiguous climax that I was expecting and actually hoping for.

It's also a horror film that builds its atmosphere with almost no jump scares at all. I'd love to think that budding young horror film makers would watch Last Shift and get what DiBlasi's done here although I'm almost certainly being naive. But what he shows here is that it's NOT the jump that creates tension in a film like this - it's the thought that we MIGHT get a jump scare that creates it. Juliana Harkavy spends so much of this film wandering around corners and past doorways that the tension creates itself. No need to ruin it with a cheap shock.

DiBlasi is also not short of a trick or two when it comes to a neat little set piece as well. A 'finger bang' suicide is a fantastic little scene, as is the dead body dragging itself along the floor, and I was just impressed by how much invention DiBlasi infused his film with. The occasional nods to Assault On Precinct 13 are kept to just that because do you need any more beyond your film being set in an abandoned police station? No.

Harkavy's excellent performance is all the more impressive considering she has far and away the biggest role in the film, being on screen practically the whole time, and is surely a name to watch. The same should be said of DiBlasi as well. Last Shift might initially seem like a fairly tame 'haunted house' set-up but very gradually reveals itself to be something far more interesting than that. It really is a very good film indeed.