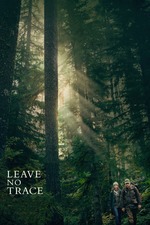 My assumption always is, when a female filmmaker makes a critically acclaimed and possibly even commerically successful film, and we then don't see anything from them for a long time, that has happened because she's female.

Of course, it's entirely possible that Debra Granik was waiting for the right project or just didn't feel like making a film for a long time after her breakthrough with Winter's Bone. It might have nothing to do with gender. I'd certainly like to hear Granik's take on these things. Even so, it seems strange to me that Leave No Trace has been released with almost no fanfare.

To the extent that I hadn't even heard of it until it popped up in the cinema schedules a couple of weeks ago, even despite the fact that it has Ben Foster in the lead, Foster being one of my favourite actors. Quite rightly, there's been a lot of talk about Foster and how he excels playing a far quieter and more internally disturbed character here than we have been accustomed to seeing from him down the years - talk I hope translates to more and more notice for Leave No Trace and Foster himself.

I didn't doubt for one second that Foster would excel here though. He's just been too good in all the character acting roles he's taken down the years, a good few of them being beneath him, truth be told. The intensity that he has become renowned for is replaced by melancholy and trauma, playing a former Marine wracked by PTSD and trying desperately to cling on to his sanity, his daughter and their individuality.

Granik doesn't seek to stray too far from a lot of themes she presented in Winter's Bone. It is, after all, another story about people seeking to live lives on the fringes of 'society' but I think Leave No Trace is actually more balanced in its portrayal. Foster is presented as a loving and protective father who's not blind to what society could offer him and his daughter, but a belief that they can lead a better and more fulfilling life on its outside edges drives him on.

Faced with a daughter who has her head turned by what she sees when the two of them are captured by the authorities, he comes to an acceptance during a sad but also quite lovely finale that he knew would catch up with him one day. Granik saves a lot of her critical eye for those authorities. Having caught up with the two of them, they reluctantly reveal that Thomasin McKenzie is ahead in her education for her age and the only reason they think she should attend school is to help her with her social skills - skills she seems to have no problems with when she encounters other people. The two of them are then cajoled into a living situation that sees them forced to attend a religious event, a pretty cutting dig at how religion is a disgustingly institutionalised necessity for those who need help or are forced to seek it.

The main question asked here is whether Foster is actually doing anything wrong. He goes out of his way to protect McKenzie although he could be argued he places her in harm's way by continuing to lead his particular life. Yet everyone seems to agree that she is a smart and lovely girl, seemingly liked by everyone who encounters her. He has done a great job raising her, just unorthodox by our rather narrow standards.

The question is never really answered but it's far more important that it was asked at all, and Granik does so in one of the year's finest films thus far.