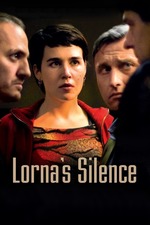 Has anyone ever seen Arta Dobroshi and Ellen Page in the same room?

Lorna's Silence is my first experience of a Dardenne brothers film and I found it to be a mixture of the convincing and the unconvincing. At its very best, it is a thoroughly committed rumination on the complexities of marriages of convenience and also the unpredictability of addiction. At its worst, it is rather silly in jumping over two really quite major story points.

There certainly was no need for either of the two jumps that are made here in this story, the second of which, occurring quite near to the end of the film, appears practically out of the blue and isn't helped by the way the Dardennes skip over a previous event regarding the fate of one of its characters. I understand the point they are trying to make about a grasp for redemption but they chose a very odd way to go about it.

There really is rather a lot to take away from Lorna's Silence that I was impressed by, however. I appreciated the effort the Dardennes put in to ensure that this was not a film that went down any easy cinematic storyline roots. It felt like a more realistic and human portrayal of Dobroshi's situation. There were no beatings from the people she was involved in and no desperate attempts at squalid notoriety by shoehorning in a sexual assault sideline. Just a contemplation on how people might actually react in these situations.

I guess I also felt that her relationships with two of the characters here, her boyfriend and the drug addict that she had married to earn Belgian citizenship, were perhaps more complicated and difficult to grasp than they perhaps should have been. With her feelings for both of them swinging from one extreme to the other, I'm not sure whether Dardeness have misstepped here or whether they're suggesting that there are other issues at play with Dobroshi.

At the very least, these points do mean that Lorna's Silence is an interesting film outside of its story, giving you a couple of good reasons to contemplate it in-depth. Dobroshi's excellent, brave and realistic performance ensures that the film has a very strong centre as she is on-screen for almost the entire film, but there are also several excellent support performances not least from Jérémie Renier as her 'husband'.

There was more than enough here to have me interested in investigating the rest of the Dardennes' work and some parts of Lorna's Silence were excellent enough to have me really excited about that prospect.