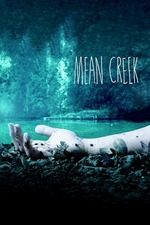 In a way I was slightly hoping that Mean Creek would be crap so I could do my 'Bland By Me' gag.

But it really, really isn't. The Stand By Me comparison is an obvious one to make but there are no comedy barfing scenes or giant leeches plucked off of a knob here. Far more serious minded and a sublimely well rounded morality tale, Mean Creek is a film that should have got far more than the limited release it received around a decade ago.

I remember regularly getting this confused with Wolf Creek at the time - both were released on DVD over here at approximately the same time, one of those film release anomalies that you get on occasion. Although I quite liked Wolf Creek, I do wish that I had gotten confused enough to have watched this instead and not waited nearly 10 years to finally getting around to watching it. I've had it on DVD for about that long as well.

Where Mean Creek succeeds perhaps most notably is regarding its portrayal of Josh Peck's dyslexic 'bully'. Director Jacon Aaron Estes seems completely focused on portraying this character right down the middle - he's an out-of-control, violent and verbally murderous little bastard one moment and a rather sweet, sensitive and lonely young lad the next. The point here is not supposed to be whether he 'deserves it' or whether he doesn't.

In fact, I'm not even sure that Estes has a direct narrative point at all, nor is he trying to put you in an irritating 'What would you do?' dilemma. He seems far more interested in creating a tale about the implications of decisions seemingly both positive and negative and tries just as hard to make sure that he characterises all of his main cast members so that the choices that they make, or don't make, don't seem out of the blue or ridiculous.

To that end, the quality of the performances of Peck and Carl Schroeder, the girlfriend of Rory Culkin dragged into a revenge plot that she does not approve of, especially are completely vital to how evenly balanced this film stays. Peck is remarkable here. You always feel as though he is teetering on the cusp of something horrendous but when he does let loose it really is a quite remarkably powerful and stunning scene - and a relentlessly superb piece of acting from Peck, who is actually even more convincing during his far more frequent introspective moments.

Schroeder's admittedly archetypal timid young girl is thankfully not pushed in a completely predictable direction, and her handling of the emotional wringer that her character is put through is so impressive that I find it amazing that she isn't raking in high quality roles in more great films. These two really did feel like the key performers in this film, and I don't think that's even to do with the fact that Culkin and Scott Mechlowicz as the insistent ringleader of the plot against Peck get far more recognisable 'coming of age' film roles.

The quiet and slightly ambiguous ending in some ways feels like the only logical way to finish a film that probably would have been severely damaged by the expected ending of in-fighting amongst the characters, so when it arrives it is as much a relief as it is quietly affecting. The only question mark I would have is that several young people go out for a boating trip - and not a single one of them has a mobile phone? This was 2004 not 1974!

That this is the only thing that aggravated me in the whole film is quite a testament to the job that Mean Creek does. With high levels of tension achieved in an amazingly undemonstrative manner and with a completely believable story and set of characters behind it, it is hard to see how this could have been much improved.