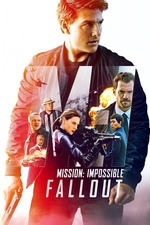 The nominations for the Golden Globes were released last night, which prompted me into a brief but restrained (for me) Twitter rant about how typically crap they were.

Mission: Impossible - Fallout, along with several other brilliant films this year (Leave No Trace, Blindspotting and You Were Never Really Here, most notably to me), didn't garner a single nomination.

I'm not annoyed by this. I think you can only really be annoyed by this if you hold such award ceremonies in esteem. And if you do hold them in esteem, then seeing extraordinary pieces of cinema, year upon year, ignored and passed over for films that were seemingly only created to win said awards should preclude you from liking them. In short, why does *anybody* treat these awards even slightly seriously?

Now, of course, this is an opinion game. The majority of people seem to be on my side in thinking this is a great film, but there are those who aren't so keen, which is fair enough. But even those who aren't so keen, and I've seen a few, usually comment on the quality of the cinematography here, the performances and maybe even the proficiency of Christopher McQuarrie's direction.

Yet not a single nod. There is a small chance at the Oscars, with the ten nominations they allow for Best Picture, that Fallout may get a nod there. But anyone thinking that this is anything more than sheer tokenism is wrong. The reason, despite all the clear qualities that Fallout possesses, that it doesn't get attention from the supposed top drawer award ceremonies and shows is because it's an action film.

Action films, along with horror films, have always been treated like the second class citizens of cinema. Critically they are rarely taken seriously except for a scarce few exceptions. The Oscars, the Golden Globes, Cannes, the BAFTAs, Venice, Berlin and so on - they rarely or never get a look in on the nominations lists. They never will, either. Why is that? Why are films like Fallout seen as somehow critically or artistically inferior to films like Bohemian Rhapsody or A Star is Born?

These were films that all of us, even those of us who don't want to see them, pointed at and knew would be drowning in awards and nominations. Despite the former garnering mixed reviews and being directed by Bryan Singer, it's still gotten exactly the amount of attention we all expected. Unless it's a total disaster, the same thing will happen with Rocketman next year too.

Yet Fallout was critically applauded across the board. It has garnered a more positive reaction than Bohemian Rhapsody, so why hasn't that critical acclaim translated to award nominations? Why haven't McQuarrie, Tom Cruise, Rebecca Ferguson, Michelle Monaghan, Vanessa Kirby, Rob Hardy and Eddie Hamilton all been given nods?

It's simple. Because Mission: Impossible - Fallout is an action film and Bohemian Rhapsody is a drama biography about someone who tragically died. And because the Golden Globes, just like EVERY SINGLE so-called major awards show on this planet are prejudiced against certain films and, more importantly, prejudiced against certain people. Especially women. Because if you're trying to tell me that Debra Granik and Lynne Ramsey didn't make two of the best films of the year between them, then I can't agree with that.

We don't need these award ceremonies. They say absolutely nothing of importance about the culture of cinema anymore. They are an irrelevance that should be ignored. I'm not just saying that because some of my favourite films were passed over. It's the same old shit every year. I'm too old to be getting worked up about this all the time and if I did then I'd be dead of high blood pressure by now.

I just think cinema would be so much better off if we didn't allow the artform to be dominated by shows that tells us what the Best Film of the year is, judged by people who are pre-programmed to favour a particular kind of film and to ignore the artistry that has gone into films across the genre spectrum. And other spectrums too - gender, sexuality, race and so on.

The Golden Globes nominations were an absurdity. Let's start treating them as such. Or don't. I'm not your dad or anything.

And watch Mission: Impossible - Fallout, even if Meher Tatna's buddies don't think enough of it. It's a good film.