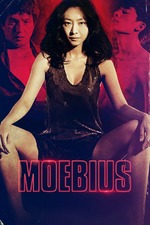 You Have 90 Minutes To Comply: The New Year Project

That kid shouldn't feel bad about pissing on his feet. I've done it too and I'm hung like Lexington Steele.

All lies aside (I've never pissed on my feet), Moebius is one of those kinds of black comedies that are so dark that you can easily miss the comedy in them. It takes the route of starting by feeling like a very serious drama but, due to an escalation of the disturbing and vile events going on, reaches a point where things become so disgusting that they are less repulsive and more hilarious. See also Visitor Q and, to a certain extent, Bug.

Moebius sets its stall out pretty quickly with the first of what I believe were four cock destructions in this film. I guess when you start like that then you perhaps run the risk of having the audience think, "Well, it can't get any more horrible!" and struggling to follow that up. But Moebius is right to do this because this is a film that's clearly about far more than genital mutilation and all manner of other graphic self-harming and violent acts.

Kim's decision to once again more or less mute his characters (of words, that is, there are a LOT of painful and orgasmic expressions here) as he did for the most part in the wonderful 3-Iron and Spring, Summer, Fall, Winter…And Spring is an interesting one but is one that arguably means even more in Moebius.

There's no real communication in a malfunctioning family outfit. Nobody really says anything that matters. It's a pretty damning but correct technique to use. I don't actually think that Kim executes it as well as he did in those previous two films - I barely noticed the lack of dialogue in 3-Iron until about 20 minutes from the end, but here it is really quite noticeable. This is perhaps because on a couple of occasions he actually has characters acknowledge they're not talking, despite their being a few instances of inaudible dialogue in the film. However, I get Kim's point and it ties in well enough.

Perhaps Moebius is at its strongest, however, when Kim is tackling themes of overriding male sexuality and their desperation to use a sex drive by any means. By de-cocking three male characters here, he also gets to explore the ridiculous and ultimately comedic ways in which men will STILL try and get their kicks even when they're not in possession of the equipment. It's a hilarious portrayal but also a damning one of the stupidity it can cause, consciously or otherwise, perhaps. Watching father and son orgasming through their ridiculous stone rubbing techniques and, when finished, suddenly realising ARGH, SHIT, THAT HURTS. Scathing but not untrue in a lot of cases, either.

Kim doesn't just stop there either. The interesting decision to cast Eun-woo Lee as both the mother and the store owner initially looks gimmicky and is confusing, but is actually a really simple and effective way of Kim condemning the way that many men view all women in the same way. In the past, I've commented how he really doesn't seem to have much affection for animals at all. Well, you can probably throw men in now as well.

Ki-duk Kim's steadfast refusal to compromise on the methods he uses to put his visions, thoughts and beliefs over is something I admire enormously. Even more so that it keeps causing him to create multi-layered and astonishing films like this. A splendid director, and Moebius is proof aplenty of that.