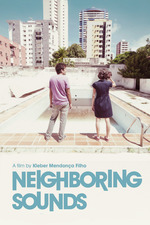 Although I've rewatched this mostly in preparation for Aquarius, it's actually a film I've been meaning to rewatch ever since I first saw it a couple of years back now.

For some reason it has played on my mind consistently during that time, despite being the seemingly more unassuming of dramas. I still don't know exactly what it is about Neighbouring Sounds that has caused it to stick in my mind as such.

What I do know is that I seriously underrated it first time round at 3.5 stars and, while I don't do star ratings for the most part anymore, seeing as though I don't know how to get rid of them on a rewatch I'll bump this up to something more deserved by this sublime piece of filmmaking. And what a much-needed change to see a Brazilian film taking a look at a different section of society, too.