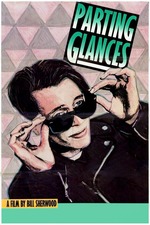 Not the most flattering poster that Steve Buscemi could have wished for, huh?

Actually, Buscemi is the main part of the intrigue I had in Parting Glances. His first major film role, shot a good eight years before he was pulling out the world's smallest violin, he puts down a very significant marker for the career he was about to have here. He is easily the best thing in Parting Glances, although he is admittedly given far and away the most interesting character here.

He is a cut way above anyone else in the film, so that is perhaps the reason why director Bill Sherwood, with his one and sadly only directing credit, cast him in that role. The truth is he is far more interesting and unpredictable than the two bland main characters, played suitably blandly by Richard Ganoung and John Bolger, and ends up becoming the focal point of the film as it reaches its last half an hour.

I don't know if that's because Sherwood took one look at him and realised that, aside from the strange tattooed woman and her freaky dancing at a party that plays out through much of the middle third here, he was the only really interesting character here. I think Parting Glances would be far more interesting a film if he had been the main focus right from the outset. It also would have been a lot funnier too.

Of course, with this having been shot in 1984, there are far bigger concerns here than whether or not I found it interesting. Parting Glances is now recognised as one of the most important gay movies of all time and quite rightly so. Released at a time when homophobia and ignorance towards sexual minorities was rampant due in part to the AIDS virus that Buscemi's character is dying of here, a film treating a gay couple just like any other couple with issues that films had been showing for decades was quite the novelty.

As such, it's an admirable film. In fact, it still feels like an admirable film even 30 years on. It may not make for the most interesting film going, but it's still not without its charms. Outside of Buscemi, there are a couple of amusing dream / hallucination scenes that worked really well while the merry-go-round of relationship mess that covers the last few minutes was really nicely done as well.

It's never entirely riveting but it is decent enough to certainly warrant a viewing outside of its importance to a whole genre of films.