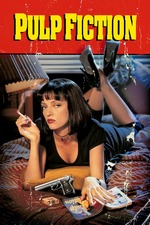 Pulp Fiction takes Quentin Tarantino to two out of two when it comes to rewatches of his films that don't quite stand up to previous viewings. But what a film this still is.

My issue with Reservoir Dogs was to do with clunky dialogue and I have to say that it's the same problem I have with this film. Tarantino's interest in the minutiae of pop culture and junk food seemed rather forced this time round and although filled with funny lines, exchanges and quips, he gets a little bit carried away for my liking in these areas.

But this is an altogether fuller and more widely interesting film than Reservoir Dogs - and for a second film, coming off the back of a low budget sleeper hit, it is a quite extraordinary leap in so many ways. The scale of the plot compared to his first film is amazing enough, but then to shake it up, reject chronology and somehow make it work as coherently as it is is an exceptional achievement. Apparently there are people that prefer an edit than someone put together in chronological order of this. I don't want to meet these people!

Again, the liberal sprinkling of 'influences' from other films really did not bother me at all even if they play less of a major part in this film than they did in Reservoir Dogs. As much as Tarantino perhaps rightly deserves some criticism for not being able to commit to full originality in his ideas, one cannot deny that his ability to pull together disparate elements and ideas and make them work in a completely different environment is impressive.

What is Pulp Fiction actually about, though? Despite the opening definition presented to us, I've always thought there was more going on as a whole with this film than we are perhaps led to believe. I've no doubt that reams of critical theory have been written about this subject and have probably covered any ideas that I may have had about this film, but for some reason I have never been entirely satisfied with the answer that it is a film that is entirely open to personal interpretation.

I reckon it's a film about the blurring between good and evil. Who are the actual good guys and bad guys in this film, for instance? It could be argued that the only real undoubted 'bad guys' in this film are those that are about to live the rest of their lives in agonising pain. The rest of the cast? It's not so cut and dry. Almost everyone here faces situations and choices that blur the lines between good and evil.

We get the backgrounds to hardly anybody here, unless you count Bruce Willis and his dad's ass watch, so we really have no idea which way they will turn. Couple that with a plot that has been shaken up and reorganised not to disorientate us but rather to wring more intrigue out of its already scintillating collection of characters, and what you have is perhaps the epitome of a true character-driven film.

To that end, assembling such an incredibly high quality cast is not only necessary but it's also actually not as easy as it looks. Enough has been said about the main cast, but on the fringes the choices of Maria de Madeiros and Amanda Plummer really stand out for me. I think those particular pieces of casting highlight to me the care and attention that Tarantino placed on making sure that everyone and everything was just right here.

de Madeiros, for instance, was an actress perfect for her role as Willis's girlfriend - playing on the innocent but naughty and also inquisitive nature that she had portrayed in the few films she had done beforehand, she might not be the most important character here but she plays it perfectly. Similarly Plummer, a really underrated actress who has always trod an interesting line between vulnerability and outright psychotic in many of her roles - and handed a role that requires both these traits to be performed convincingly, she shines memorably, and not just because some of her dialogue ended up on Scooby Snacks.

Pulp Fiction is actually a film that has to be flawed to work properly as a piece of 'pulp fiction' so in almost every way it is perfect for what it sets out to do. It isn't far off when judged away from its self-interpretation either.