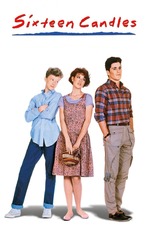 I decided to do this weekend because it's such a spectacularly sunny day, and is likely to be the same tomorrow, that I can't think of a better type of film to fit the weather. The only question is whether I will be able to resist watching The Breakfast Club again....

Sixteen Candles was worth watching for the soundtrack alone. Little Bitch by The Specials was an especially inspired choice. The film almost gets half a star for that alone.

This was John Hughes' first directorial stint after penning several films of distinctly mixed quality and although it wasn't brilliant by any means, if it contributed towards him casting Molly Ringwald and Anthony Michael Hall in The Breakfast Club then its place in history should be nice and secure. The main problem with Sixteen Candles is that it's such a stop-start affair.

It starts off brightly, if predictably enough, with Ringwald despairing over her family forgetting her 16th birthday as they busy themselves with her older sister's wedding the next day. There are plenty of laughs in the first third of the film, especially when it involved Joan Cusack's issues with a neck brace. As a CBS executive in a certain episode of Seinfeld pointed out, "Those things are funny!" Mind you, so is Joan Cusack. I love her quite a lot and she lifts any film that she appears in.

Then it meanders its way through a completely unmemorable middle third that is only enlivened by Ringwald's grandparents. It's not so much that nothing happens but that what is happening is not very interesting. It manages to lift itself just about enough for its final third, but that is mainly down to Blanche Baker's hilariously drugged up attempt to get through her own wedding. She is also amusingly laid back and glazed over during an earlier chat with Ringwald as well.

I don't think it helps that Michael Schoeffling, as the object of Ringwald's desire, is one of the most boring lust/love objects in the history of romantic comedies. Mumbling his way through his lines and showing about as much emotion and range as Keanu Reeves at his worst, he is absolutely rubbish and in no way can you understand why Ringwald would want to be with him in the first place. He looks a lot like Matt Dillon, though. Maybe they should have just hired Matt Dillon?

There is a nice but all-too-brief cameo from the great Brian Doyle-Murray towards the end, and the distinctive voice of Zelda Rubinstein is busted out for no particular reason. Otherwise, it's fairly unremarkable and a bit of a disappointment considering the director and talent involved. Even so, there are just enough laughs and it's charming enough.