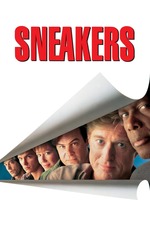 Finishing off my run of rewatches tonight (I can't be arsed copying and pasting that long name I created for them) with something that more people should be familiar with.

I know Sneakers is well over 20 years old now but I still think there is something quite comforting in the fact that a film like this was a pretty notable box office hit. Sneakers took over $100 million at the box office despite the fact that it probably isn't really your normal multiplex filling crowd-pleaser. It's a bit more savvy than that, takes its time, puts together a plot, and opts for a cast that is noted more for its acting ability than its ability to put bums on seats.

Of course, a few of these people have done that, too. Robert Redford, Sidney Poitier, Ben Kingsley, Dan Aykroyd and to a lesser extent River Phoenix have or had all been part of films that had done huge things in the box office but Phil Alden Robinson has a cast at his disposal here that is also adept at bringing home a very cleanly assembled and effective story that is never too heavy but never too light either.

The lead-in for the IMDb entry for Sneakers would have you believe this is a "complex but lighthearted thriller" but you can't really call this a complex film at all. It is more lighthearted than complex, I would say, but where Sneakers works is that it isn't afraid to test the brainpower of its audience but doesn't get carried away with the details or any twists and turns.

It also keeps moving at a good but never breakneck rate. For a film just over 2 hours long it really can fool you into thinking that it is a much shorter film because it is able to flow between its main events without any elongated periods of not much happening. I say that as someone who has seen Sneakers at least 5 or 6 times now since I first saw it back in those wasteful mid-90s as well.

I really, really like Sneakers. It's the type of film that I am always so happy to see Hollywood do and get right. As much as I enjoy something completely dumb that solely exists to entertain me or a film that is almost entirely built around the need to engage me on a cerebral level (you don't need to try too hard, films), I have a double appreciation for a film that can make me think a bit but entertain me a lot.

These kinds of films are not easy to do but I like it when people at least try and have a go at making such films - when they come off, it gives me double the reason to enjoy them after all. It's probably the reason why I'm happy to revisit Sneakers on a semi-regular basis and still really enjoy it right up to its admittedly overly silly ending.