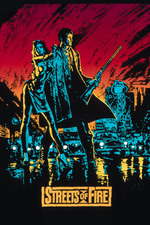 Michael Pare is the kind of guy who is too cool to sit down on the train. When it's empty. He comes back to his home town after his ex-girlfriend (Diane Lane) is kidnapped halfway through a concert by a sort of goth-looking, leather dungaree wearing Willem Dafoe and his gang of nutters. Her manager (Rick Moranis, stating regularly that things are "the shits") and a female drifter (Amy Madigan) come along for the ride.

This film's....well, what the hell is it? Because it's not quite the 1980s cheesy actioner that I expected it to be. Most of the people dress and act like it's the 1950s, half the music sounds like it's from that period, and Rick Moranis is playing a straight role. It's not hard to see why it flopped at the box office. A 1950s/1980s action crime comedy musical isn't exactly easy to pull off. It's completely nuts.

But it's bloody tremendous fun. Pare is absolutely rubbish in the lead role, with his Gary Neville moustache and sex appeal of a walnut, but in some ways his lack of competence is almost perfect for this film. Dafoe rightly decides that subtlety isn't the order of the day, and although he doesn't get enough scenes he certainly makes up for it when he's on screen.

Everyone else is either miscast to the point of brilliance ("Yes, Amy Madigan would be perfect as a gruff New York accented tramp/gun for hire! Oh, and sling in Rick Moranis as a sleazy music manager and love interest for Diane Lane!", the action scenes are pretty good, especially the cracking climactic battle (yeah, why not have a fight with some weird stone hammer things, wooo!), and the dialogue is usually diabolically shit to bloody hilarious. Actually, all the dialogue is like that - both those things at the same time. That's genius in itself.

You're lying if you say you have any idea what Streets Of Fire is meant to be. All I know is that it's absolutely great. I love you, Walter Hill.