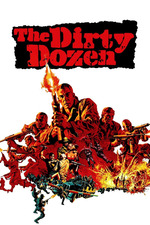 One of the reasons I loved Inglourious Basterds so much was because it reminded me of The Dirty Dozen. Completely illogical plot, mismatched and sometimes psychopathic soldiers, a complete lack of interest in getting historical events spot on - yes, it had all the hallmarks alright.

I do prefer my war films to completely ignore history and just be total exploitation exercises. I do prefer them to be action packed and filled with thrills, a la The Guns Of Navarone and Where Eagles Dare, with preferably as many Nazis slaughtered as is possible. I just noticed I harped on about Inglourious Basterds in my The Guns Of Navarone review as well. I must have liked that film, huh?

That said, the thing about The Dirty Dozen that surprises you most is just how much time it takes Robert Aldrich to get to the mission that these miscreants are being trained for. Lots of time is dedicated to their training and various exercises and run-ins with Robert Ryan's officious colonel (called Dasher Breed, for your information!) before they even get to the mansion housing the Nazi officers they're supposed to murder.

Under normal circumstances I would despair that it would take so long to get to that part, but what helps the film is not so much the quality of the cast, which is phenomenal, but the characters themselves. Sure, two or three of the Dozen are fairly forgettable but a lot of them are interesting. That's before you get to George Kennedy's nervous tactically astute major, Ernest Borgnine's cigar chomping general or Ralph Meeker's snotty captain.

It looks from the outset that Cassavetes is going to be the main focus of attention, but somewhere in the middle the focus switches to Charles Bronson. I wonder why that was? Either way, both characters are enjoyable to watch, but none of them can perhaps match Telly Savalas's religious maniac sex pervert, cackling away to himself as he knifes an innocent woman and then starts taking potshots at his own men. He's utterly terrifying here, giving this film a harder edge at times that it needs ahead of its violent finale.

Then there's Lee Marvin. I'm only going to end up saying much the same things I've said about him before and my admiration for him knows no bounds. One thing I've noticed about his performances that became clear to me watching this is how he is always moving at speed. When he goes to walk somewhere, it's always an urgent movement that your eyes are drawn to immediately. Goodness me, he was absolutely fantastic. And he is fantastic here, as you wouldn't be slightly surprised to hear.

It does perhaps wind-up a bit too quickly and maybe meanders a little too much early on but The Dirty Dozen is still a top class example of the war adventure action film - one of the very best, in fact.