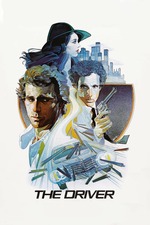 I stuck The Driver on last night because I had time for another film, yet was feeling too tired to put something new on that would have to have my full attention.

It was ideal because, firstly, it's one of my favourite films and secondly because I haven't seen it for a few years so it was overdue a viewing as well. Also because it's the perfect film length - one and a half hours long.

Of course, 10 minutes in and I'm absolutely fully awake and 100% attentive because once you see that opening car chase scene, there's no way you're going to be half-dozing. The new thing I noticed on this viewing though, because it's one of those films where you do find something new and interesting about it each time you watch it, and that's just how meticulous a film it is.

I love Walter Hill's stuff and one of the many charms I often find in his films is that they're almost always quite messy and dishevelled. There's a disorganisation to them that often lends itself to the chaos that ensues in the likes of The Warriors and Trespass especially.

That's not the case with The Driver. It really is such a carefully designed piece of work, and I think it's fitting when you consider that the eponymous lead character likes everything to be just so. He doesn't compromise with what he can do and what he wants to do, and he leads a very simple and uncluttered life. So Hill surrounds him with a film that befits him perfectly.

It is an interesting clash with the unpredictability of the car chases he finds himself embroiled in. He has more than enough disunity in his 'working' life, so he sure as hell doesn't need any in the rest of his life. But almost everything around Ryan O'Neal seems to be so well ordered as well too. Bruce Dern goes through a very specific process to trying to capture O'Neal, refusing to believe that he could be wrong and that his methodology is going to be right every step of the way.

Hill even tailors Isabelle Adjani carefully, and you can see why even O'Neal might show some semblance (and it is only a semblance) of trust in her. Adjani is absolutely beautiful in this, I don't know if anyone has ever looked better in a hat ever. It's a shame that she has gone on record as not thinking much of the film because I can't think of a better film she's ever been in.

Then again, The Driver was met with critical and box office apathy when it was first released, only to be embraced in more recent years and rightly so. So her opinion of it probably reflected that, I don't know if there are any more recent quotes from her about this film. She is an interesting piece of casting, that said, considering she would have been relatively unknown outside of her native France at that time, but she is moody and splendid, just as the film demands.

As for Dern, I would struggle to think of a character that has caused me more anxiety in films than his. I don't even know why. He sits on the cusp of corruption in his attempts to capture O'Neal, his utter confidence in his methods being totally unshaken even when he is double-crossed for the first time. The way he walks in and out of rooms belonging to O'Neal and Adjani to make them know he's going to capture them is very stressful even after about a dozen viewings. That's just the kind of great actor he was.

For me though, the crowning achievement of The Driver is how expertly it mounts the motivations of O'Neal. He states late on that the money is of a much lesser importance. He's in it for other reasons and, later on, he takes a gamble on letting Dern indirectly push him into a job he doesn't really want because he just wants to beat The Detective. That's storytelling and characterisation of the very highest calibre, and The Driver is a film of much the same level.