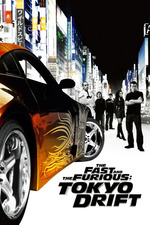 Well what the hell were they thinking with this one?

Talk about running before you can walk. I might have enjoyed 2 Fast 2 Furious a lot more than the original, but that was certainly no reason for them to get ideas above their station and try a spin-off or whatever the fuck this was meant to be. We're just getting used to the characters (well, one of them, maybe two) and then you get rid of them - for THIS.

No. For a start, drifting. Who gives a shit about drifting? Who on earth out there heard about this film and thought, "WOAH DRIFTING?! FINALLY!" Just drive the fucking cars. It's not even as if the driving in this film plays an important part in what's going on anyway, it's completely superfluous to what's going on. All the driving in this could have been dispensed with, especially the end race which is hilariously pointless.

It's just a shite crime drama with unthreatening little turd characters and some schoolyard bullying thrown in for good measure. The characters are shit, the film is boring, Lucas Black is meant to be 17 but he looks 34, even though that's about 10 years older than he actually was when he shot this. And to cap it all off, Lil Bow Wow's in it. Was there something written into somewhere which said that dreadful rappers had to be in all these films? I mean, I didn't mind Ludacris in the last one but come on. And he's called Twinkie. Again, is anyone reading this script?

It's a very bad film and a very bad decision and I'll be interested to see how they do the next one after this farce. Also, one more thing. If that guy's called DK then how come he wasn't flinging banana skins and shit during these races?