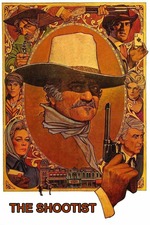 I run the risk of repeating myself in almost all my reviews of later John Wayne films, but after writing the amount of shit I've done on this site, I run that risk on every review now.

Even so, I really struggle to reconcile Wayne's late career westerns with his reprehensible political views and racism. The Shootist, his final film, is a surprisingly tender and thoughtful affair where he quite obviously attempts to draw a veil over a lot of his career rather than celebrate it. He wants a quiet burial, he gets a pretty ignominious death, and he garners nor wants any sympathy from anyone.

There's a self-awareness in so much of his 60s and 70s work that just didn't seem to exist in his personal life. I don't know if that's part of the reason why I usually find his later stuff more interesting, or if I'm just completely confused. Whatever the answer, I'm unshifting in my opinion that almost all his best films came after The Searchers.

The Shootist gave him a chance to work with Don Siegel, who himself was approaching winding down his career - although one more great film, Escape from Alcatraz, was still to come. Wayne was deemed too old for Dirty Harry, and rightly so, but their work together here left me a bit sad that they didn't get to work together more,

As out-of-character as this film may be for Wayne, it was for Siegel too. Although he was capable of sensitivity in his films, it's not what he's ever been known for. But the scene where Wayne and Lauren Bacall say a quiet goodbye could have been one of the best scenes he ever directed, and Wayne's best scene full stop.

A fitting end? I really don't know. But an exceptional one, for sure.