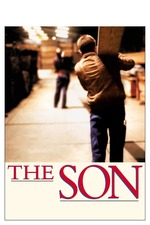 My second one by the Dardennes, and quite similar to my experience with Lorna's Silence, really.

I'd say this is a smoother film, I didn't experience any large jumps or gaps in narrative here. Because it's such a simple story very simply told, I would have expected that anyway if I'd known much about it beforehand. Much of the tension here is derived from the obvious question as to whether Olivier Gourmet is going to avenge his murdered son or not, and at times it felt as though they were leaning rather heavily on how the ending to this would pan out.

I actually would have preferred it if it had spent more time with Gourmet getting to know Morgan Marinne. It's clear that Gourmet is looking for reasons not to avenge his son, rather than siding with actually doing it. That much is clear when he lies to his ex-wife, Isabella Soupart, about working with Marinne. As such, it might have worked better if Gourmet had gotten to know Marinne better.

It felt as though it just needed a bit more time to work things through. The downside of that is that it would have expanded its running time and risked stretching the patience of the viewer, as this is already a very slow-paced and deliberate film. As it should be considering the story it is choosing to tell. But it's also filled with tension at the end, created in no small part when Marinne gives a clumsy answer as to whether he regrets killing someone.

It's interesting that the Dardennes don't make this about grief and dealing with it. Gourmet and Soupart have separated and clearly worked through their issues as far as they can, with no real conflict visible between them. This is more about life moving forward after a tragedy and how to deal with a sudden and unexpected barrier to that.

As unorthodox as it is, The Son works really well and the way they constantly focus closely on Gourmet's movements and expressions makes his superb performance extremely important to the realism this achieves. Intriguing more than entertaining, it's nonetheless renewed my interest in seeing more by the Dardennes.