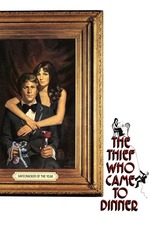 The Thief Who Came to Dinner was made 5 years before The Driver, yet there are a couple of interesting parallels between Bud Yorkin's film and Walter Hill's classic.

This is a film where Ryan O'Neal, at one point, has to show off some neat driving skills to avoid some cops. But it's the ending that interested me most, where once again the investigator pursuing O'Neal in full knowledge that he has his man but just can't prove it is left holding the briefcase at the end and letting O'Neal go. Really interesting, and I wonder if Hill and / or O'Neal bore this in mind when they created their collaboration.

Yorkin's film isn't nearly as good, it's more of a throwaway crime caper that probably coasts a bit too much on the charm of O'Neal and a luminous Jacqueline Bisset in the leads. Oh, and on Warren Oates as the insurance investigator. IN A SUIT! I'd never seen Oates in a suit ever and I'm still not over it. Just look at this!

The plot is paper-thin but it feels like Yorkin knows that and just tries to keep it nice and breezy with a good few laughs and a couple of neat robberies. It possibly rushes too much through its opening segments, from O'Neal walking away from his job through recruiting his partners in crime and wooing Bisset, but I think it works quite well this way anyway because this film certainly would not have benefitted from being any longer than it was.

I'm also developing an emerging adoration for crime films where the perpetrator is doing it just for something to do rather than to earn a chunk of money. Feed me more of these.