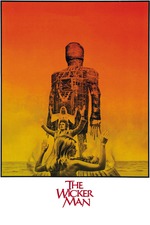 In his fantastic mini-series of documentaries, A History Of Horror, back in 2010 Mark Gatiss coined the term 'folk horror' to describe films like The Wicker Man - he also cited Blood On Satan's Claw and The Witchfinder General as two other examples.

As much as I think it's the perfect term for a film like this (I think also something like The Last Great Wilderness could also qualify), The Wicker Man was something different to me. To me it was more about the absurdities of faith both past and present.

Of course, being a major league latecomer to this film, I'm quite sure that multiple essays, articles and reviews have been written about the subject and the writers themselves have probably expressed similar feelings about the film. It all comes to a head during that final scene as one bloody-minded and unwavering belief in a faith clashes with another almost in the ultimate battle of the ludicrous.

What is truly great about the film is that neither Edward Woodward's Christian beliefs nor the Summerisle community's Pagan beliefs once come close to wavering. The tension in this film does not come from who can crack first and who will 'see the light'. Director Robin Hardy is perfectly correct in showing how unbreakable faith can be even in the face of an event or an occurrence that clearly cannot be solved with faith.

He leaves us on a precipice, teetering between admiration and despair for these two sides, regardless of what our feelings may be about the faiths being portrayed. So, while Woodward stomps aggressively and arrogantly around the island, dismissing out of hand the "debauchery" that he witnesses, we are left despairing at his faith. Not because we necessarily agree with what is being practised by the islanders, but because we are witnessing a man clearly with not a chink of an opening in his mind.

We also struggle to side with him when he has his first meeting with Lee. Lee, utterly charming and seductive, is so silver-tongued, well mannered and calm that we are completely beguiled into admiration for him. But the see-saw teeters another way later on during the May Day celebrations as he prances around the island looking completely ridiculous, and from that moment on.

It is just an absolutely sublime balancing act that Hardy manages with this unfailingly peculiar film, still possessing of the power to surprise and confound four decades since its release. That was where the real magic of the film lay for me, but despite having the ending spoiled for me many years ago, this film was littered with so many other surprises that it barely mattered in the end.

The use of music, and the extent of the use of music, really surprised me. It was not all whooshes, clanks and chattering voices like the clumsy Kill List spits out during its The Wicker Man inspired moments. Here we get cheerful and only intermittently eerie sing-a-long folk tunes. The intention is not to send chills up your spine, it is to disorientate you and leave you in even more of a muddle than Woodward is in when he arrives at the island.

Lee is wonderful here. Of course, being a stalwart of British horror films as he was by this point, he was on paper an obvious choice for his role. Charming villains had been his stock in trade for Hammer for many years beforehand. But actually, this must have been quite a test for him. There are no monstrous reveals or moments of blood-letting for him to build to. The only time he threatens to be even slightly angry is at some poor quality dancing during the May Day parade. He is required to be far more subtle than at perhaps any point in his career to that point, and he is irresistible.

Woodward would perhaps go on to be known best as someone outside the law who wanted to help people, but he really could have had a magnificent film acting career is he had wanted to. His performance during the last 20 minutes of this film is an extraordinary display of film acting that, despite the nature of those scenes, never lapses into the hysterical. I'm not actually sure how he manages that, and he helps us find the sympathy for his character that his character wrongly presumed we should have from the beginning.

The Wicker Man's enduring quality and the admiration it still holds may have a lot to do with the way it winds to a conclusion, and perhaps even due to the complete pig's ear that was made of the remake, but it is admiration that it utterly deserves and never threatens to lose right from its opening moments. A deserved contender for the greatest British horror film of all time.