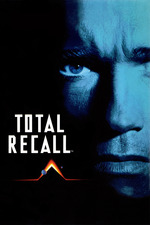 When does the currency in real life get to be credits?

I have to admit that the first two or three times that I watched Total Recall that I didn't quite get it. For some reason I couldn't follow the plot at all, the special effects were complete crap and it just didn't quite live up to some of Arnie's other actioners.

I did stick with it, though, and the last few times I've watched it I've thoroughly enjoyed it. This latest viewing drummed up many of the similar memories and views I had the last couple of times I watched it, so I think I have reached the point of maximum appreciation for Paul Verhoeven's film.

The special effects are still bloody awful. Well, they are hardly likely to have improved in the last 23 years but they looked clumsy and stupid even back in 1991 when I saw it for the first time. Particularly so when it involves any kind of facial contortions either from pulling an object out of a head, suffocating on the surface of Mars or taking off the false old woman's head.

It's still baffling to me that the effects in this film were so rotten. It was baffling back then as well. Because in general the sets and the backdrops are pretty well done and Mars generally does seem like a dusty and industrial hell-hole that you would probably imagine it would be like if it was ever populated. It's just when it comes to faces. Even the three-titted woman looks relatively realistic. A bronski would be tricky to pull off from her, though.

The performances are generally pretty good as well. Arnie's Arnie, Ronny Cox and the great Michael Ironside are delightfully and typically vicious baddies, and Rachel Ticotin is a reliable plucky action beauty. But I always manage to forget just HOW beautiful Sharon Stone was in this (I already knew she was stunning from the really quite good fun King Solomon's Mines) and how good she is as a villain as well. I also forgot how terrible Mel Johnson Jr. is as Benny, the irritating taxi driver. He's absolutely shite. But amusingly so.

Total Recall could easily have been panned as a total load of nonsense because it does have plenty of faults, but it's also an excellent action film with plenty of suspense and an engaging plot and when it comes to this kind of violent sci-fi adventure, Verhoeven was something of a dab hand. It's still splendid entertainment.

I don't like the bit with the rat getting shot, though. And no, I'm not going to bother with the remake.