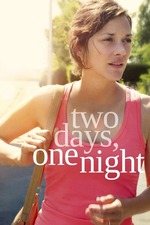 The Letterboxd Era Catch-Up 3: Steve Dies At The End

This is my third film by the Dardennes following Lorna's Silence and The Son and I'm quite taken by the simplicity of their storytelling.

Two Days, One Night is probably the most well-rounded of their films that I've seen so far. It possesses more thematic depth but does so without going beyond the scope of their unfussy plotting. This, allied to a stunning performance from Marion Cotillard (who I think I've only ever seen in crap or disappointing films aside from maybe Taxi), creates an anxious but also occasionally lovely story.

The cracks of light that Cotillard encounters here among half her co-workers, especially an emotional and thankful refugee, are well earned by a wonderful final scene. This is how to craft a positive and affirming ending even though she's not ended up getting what she wanted. However, what she has been through has strengthened her, shown that she's surrounded by love, and that perhaps she can do a lot better. She deserves it. I loved the ending to this.

What I also really liked about it was how it takes the very most subtle of digs at corporate management. A boss who's trying to find an easy way round firing Cotillard without having to make the decision himself, making her co-workers essentially make the decision for him. It would be very easy to demonise him through some other cliched means but simply highlighting a laissez-faire management technique and couple with corporate double-speak does the job splendidly.

There are heartbreaking moments and it's a heartfelt performance from an actor far too good to be slumming it in worthless Chris Nolan films and sundry other American borderline tripe like The Immigrant. The Dardennes work just as hard on trying not to demonise her co-workers and to show how hard things are for all of them too (save for one or two absolute bastards), and this is as important as anything else in ensuring that Two Days, One Night works as well as it does.