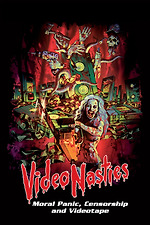 Quite simply one of the very best documentaries about films that I have seen, and in so many ways, too.

It's by no means a balanced documentary - it is largely a polemic piece that casts deserved derision on people such as Mary Whitehouse and former MP Graham Bright, two of the main driving forces behind the Video Recordings Act of 1984. But it IS one that does affors Bright the opportunity to have his say and even, frustratingly, falls short of questioning him further regarding his proven lies about his purported research at the time.

But balance isn't really supposed to be the point of Jake West's eye-opening documentary anyway. It is more of retelling of one of the more unedifying periods of censorship in the history of art and media in the UK. It is especially compelling when interviewing Martin Barker, one of the few academics who dared, at the time, to question the panic that had arisen regarding so-called video nasties. It's an unexpected emotional centrepiece of this documentary and a compelling watch on its own.

The package that this documentary came with also contains a complete set of trailers for all the films that were banned under the aforementioned act as well as those that were later removed from the banned list. These are a thoroughly entertaining watch in their own right and a superb companion piece to a fine, if cheaply made, documentary.

George Carlin: On Location at Phoenix