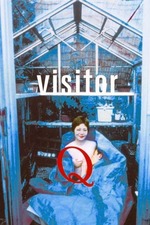 Hands up who would like to see Takashi Miike direct a children's film?

If there is a director more prone to eclecticism in their work than Miike working right now then I would love to know who that is. It's diversity that walks hand in hand with prolificacy when it comes to him as well, churning out stuff like he's the cinematic version of The Fall. It would also be a pretty fair fight to see who is more mental - Mark E. Smith or Takashi Miike.

I've only seen bits and pieces of his work but Gozu (completely insane Lynchian gangster drama), One Missed Call (straightforward but enjoyable J-Horror) and Box (his splendidly atmospheric contribution to the Three Extremes anthology) could not be more different. Now on to the fourth piece of work I've seen from him (I'll be watching a fifth, Lesson Of The Evil, this weekend) and once again it's quite different.

It's probably as close to Gozu as it is to anything else I've seen from him so far, mainly because it is such a peculiar black comedy with a similar obsession with lactation. I'd love to know how exactly he went about the casting process for choosing Shungicu Uchida as the mother of the oddball family (to put it mildly). I'd like to think he put an ad in the paper saying:-

"WANTED. Actress for new film. Experience not required. Must be able to lactate copiously on demand. Nipple pads provided."

To be quite honest I'm not sure why I enjoyed this as much as I did but it is topped and tailed by what I thought were two excellent passages. The opening scene between the father and daughter is brilliantly shot, almost ingeniously so, and also impressively squalid and oppressive, leaving you wondering exactly what is going to happen here.

Meanwhile the closing scenes, which really do initially look as though they have been tacked on for shock value, turn out to be VERY funny indeed. It could just be my sense of humour, though. Hell, they may well have been tacked on for shock value but I still enjoyed them. What goes on in-between is not quite as impressive or interesting but it is never lacking in something going on, whatever the hell you think that may be.

I remember when I went to see Gozu at the cinema that the reactions of the people watching with us were a mixture of horror, panic, revulsion and hilarity. Visitor Q might not make such inventive uses of ladles but it will provoke similar reactions - for better or worse.